Back in 2011, Gibotech intro­duced robotics into the sterile workflow of hospitals. We did this with an auto­mated Central Sterile Supply Department, CSSD, which in several different ways helps to streamline and optimize the work­flows in the hospitals. We are proud to have created the first intel­ligent CSSD in the world, which is respon­sible for auto­ma­ti­cally steri­lizing the hospi­tal’s instru­ments and operating equipment at Rigshospitalet in Copenhagen. This CSSD is a fully auto­matic solution in a class of its kind, which is expected to set the standard for future sterile centers both here in Denmark and abroad.

With a fully auto­matic Central Sterile Supply Department, it is possible to ensure that the steri­lization of instru­ments and operating equipment is carried out correctly so that hygiene is in order. An auto­mated CSSD will provide a quality-assured work process, as the actual work on steri­lization takes place through a uniform, high-standard work process, thereby greatly improving the actual hygiene of infection. 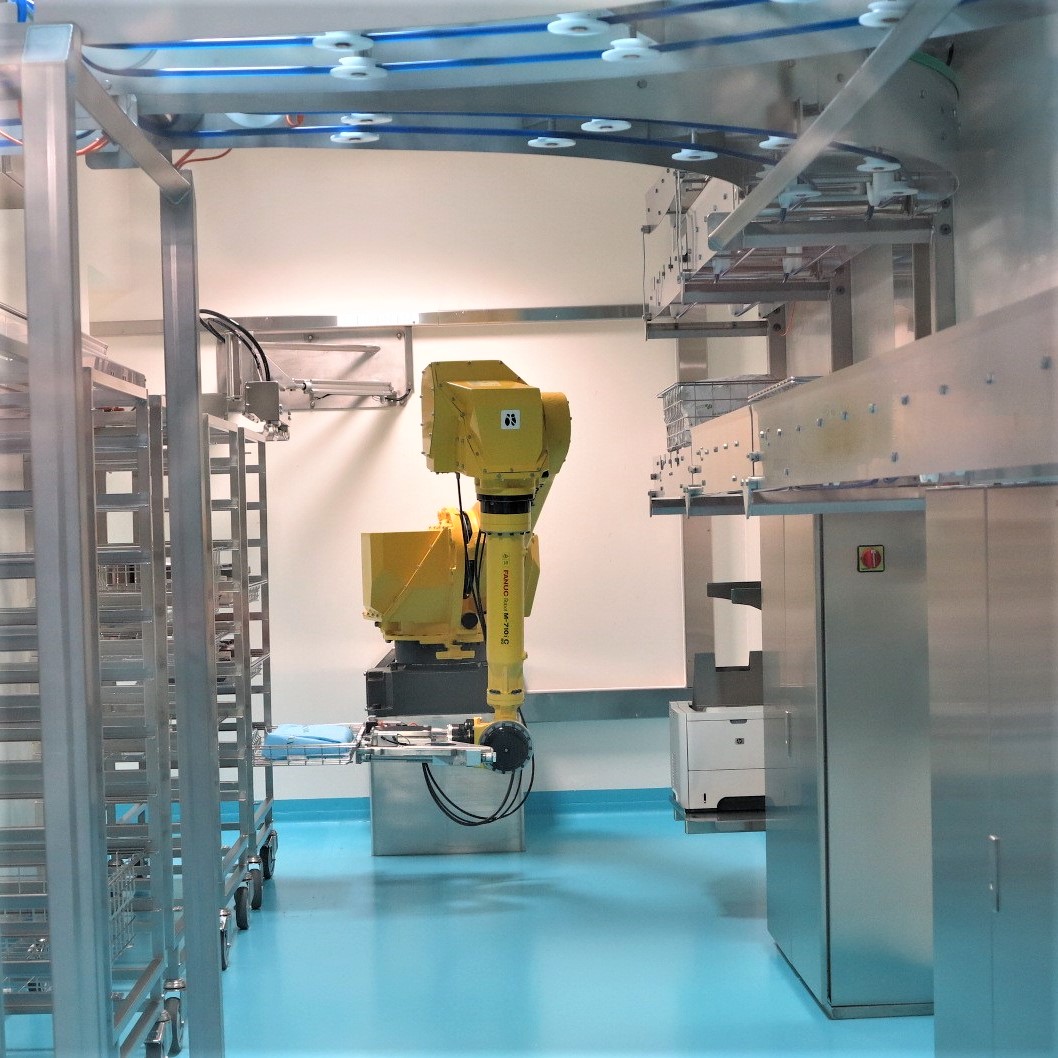 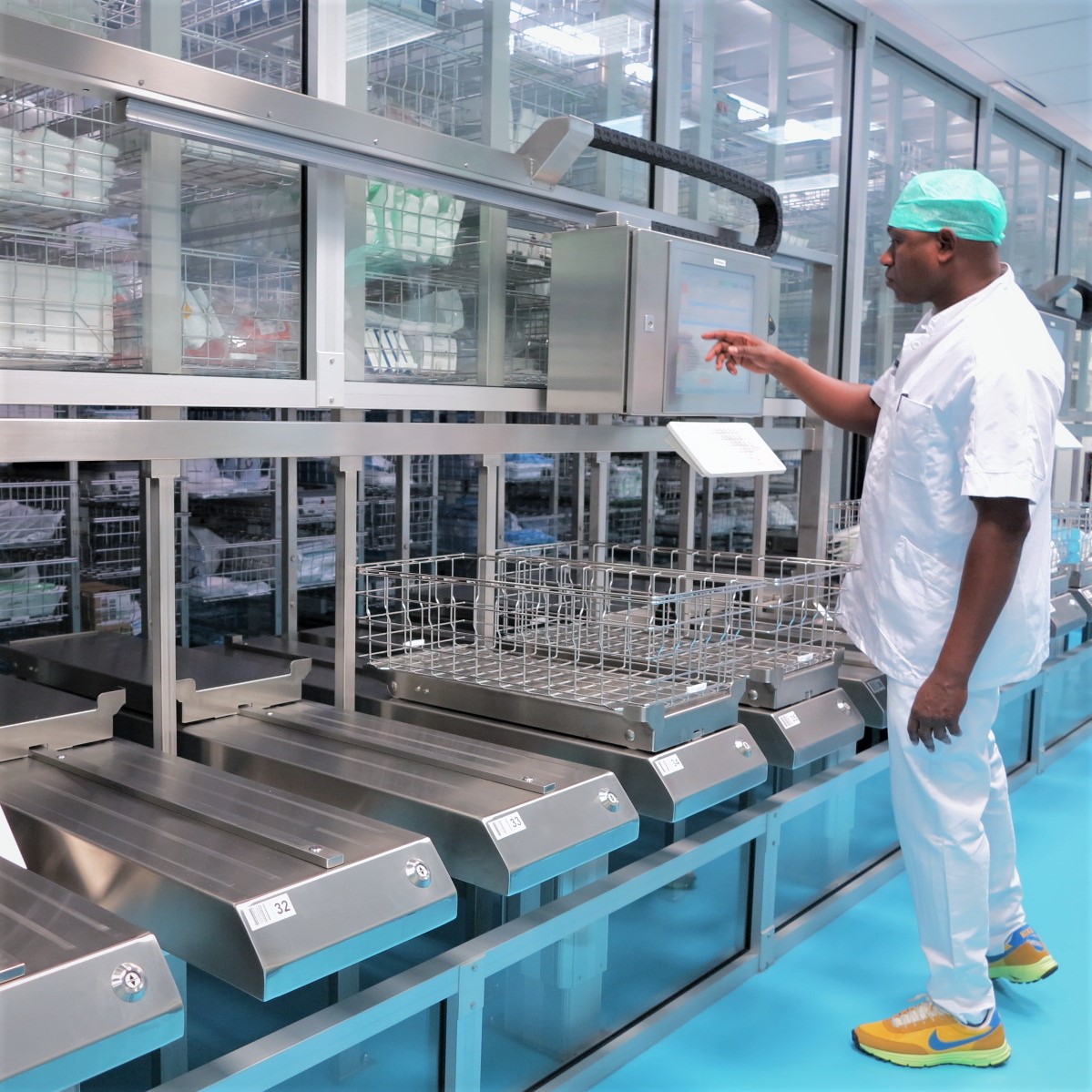 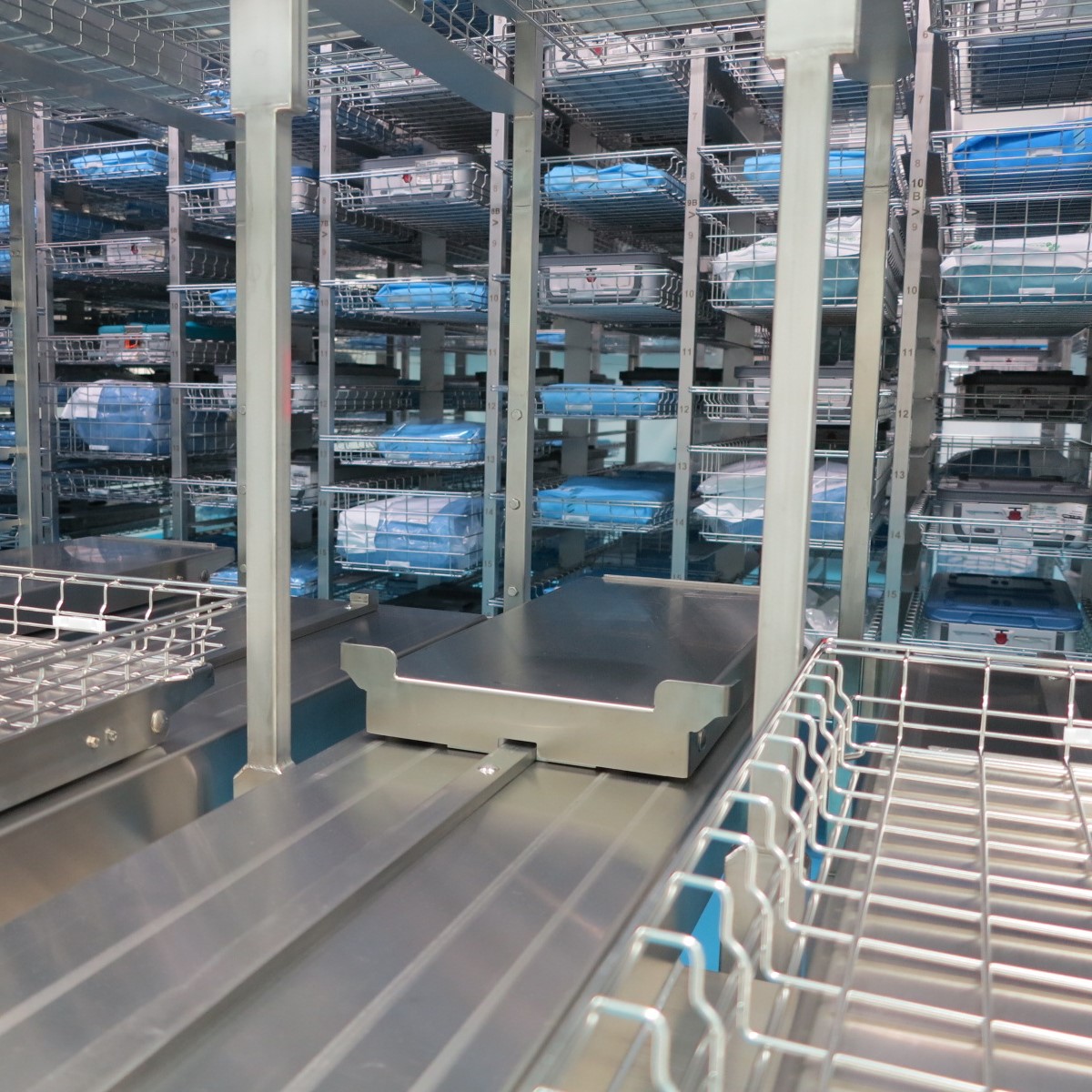 A Central Sterile Supply Department involves the use of robots and a conveyor belt, as well as a fully auto­mated sterile ware­house. This means that from the moment the surgical instru­ments arrive at the CSSD from the operating depart­ments until each instrument tray is packed and steri­lized, the work will be supported by robots and assembly lines. At the CSSD, robots and conveyor belts will perform the physical lifting when the equipment is to be unpacked and packed in transport wagons.

The Central Sterile Supply Department is also made with a storage system that can ensure that the surgical containers are put away and that the transport wagons are packed with the instru­ments needed for each operation. In this way, the number of hand­lings is reduced, mini­mizing the risk of work injuries in employees and extending the sterility life of the instru­ments that have been handled by CSSD, as there are fewer hands coming into contact with the instru­ments and trays. The CSSD will streamline the work of washing, packing and auto­claves the surgical instru­ments, and it can service all depart­ments, outpa­tient clinics and operating depart­ments in the hospital.

At Gibotech, we create tailor-made solu­tions for the indi­vidual customer, and an auto­mated CSSD can thus be established in completely new buil­dings and can be adapted to the requi­re­ments of already existing buil­dings. With a CSSD, time is released by employees for clinical and patient-related tasks. In Denmark, there are strict requi­re­ments for the working environment, but this should not be consi­dered in an auto­mated CSSD, which can be placed in environ­ments where people are not allowed to work.  Since our robot solu­tions are based on modules, it is possible to adapt the CSSD to suit the specific needs and capacity of each hospital.

At Gibotech, we can offer several different kinds of robotics that can help optimize the sterile workflow in hospitals. In addition to the high-tech CSSD, we have also deve­loped various storage systems that ensure easy and effi­cient product reception and handling, just as Gibotech is behind various solu­tions for handling blood samples in hospitals. As long as the machines are in operation, we can also offer to enter into an agre­ement for robot service, which also applies in the evening hours as well as on weekends. 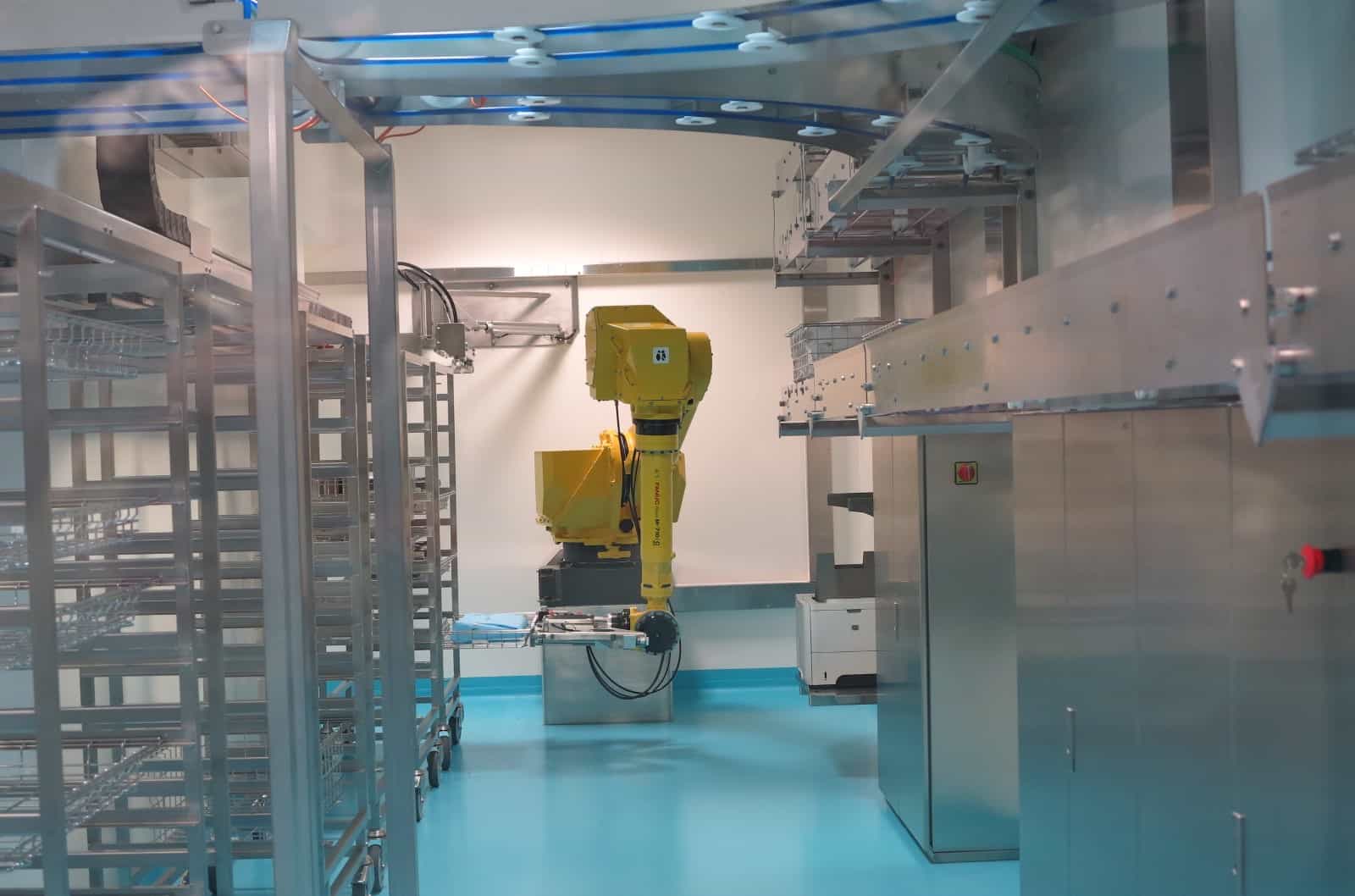 Automatic hospital logi­stics faci­li­tates the work of the employees. A Central Sterile Supply Department can be made so that the indi­vidual employee can log in and the table auto­ma­ti­cally adjusts to its height so that the working position is optimal. In this way, the ergo­nomic condi­tions of the employees are improved, which in turn can reduce the number of injuries and sick leave in the workplace.

Automation enables technology to monitor and control the production and delivery of products and services. Automation has many advan­tages and can benefit both healt­hcare and busi­nesses. At Gibotech, we develop indu­strial robots that allow us to make full use of the production facility and improve compe­ti­ti­veness. Robots can work 24 hours a day and do not need holidays and sick days, and auto­mated solu­tions can thus help improve production capacity both during normal working hours and outside.

Whether we are deve­l­oping hospital robots or indu­strial robots,we do so in close coope­ration with the customer and based on thorough analysis to ensure that we meet the specific needs. We have many years of expe­rience with automation solu­tions, and it is precisely this expe­rience that we draw on when deve­l­oping new solu­tions for our cust­omers in the industry and hospital sector.

There are several good reasons why auto­matic hospital logi­stics is an inve­stment that benefits employees as well as patients in both the short and long term. The auto­mated work processes will reduce the number of human tasks that natu­rally minimize the risk of human error. Automatic hospital logi­stics also restricts unila­teral and repe­titive work, just as a Central Sterile Supply Department ensures that the heavy lifting is handled by robots and conveyor belts, and this could therefore improve the ergo­nomic condi­tions for the employees at the hospital. If you want to know more about the many benefits asso­ciated with a sterile center, you are welcome to contact us.

The first in the world

Gibotech installed the first steri­lization central at Køge Hospital in 2011. In 2018, Rigshospitalet and Herlev Hospital will follow.

Gibotech’s solu­tions are modular and scalable and can, therefore, be adjusted for the hospitals’ indi­vidual demands and requests.

Monotonous and repe­ating tasks are mini­mized and the risk of work-related injuries is reduced. The staff will have less sick days.

Increased quality Fewer manual tasks provide a higher quality and reliable results with 100 % tracea­bility, and the employees have more time for clinical, quality, and patient-focused tasks. 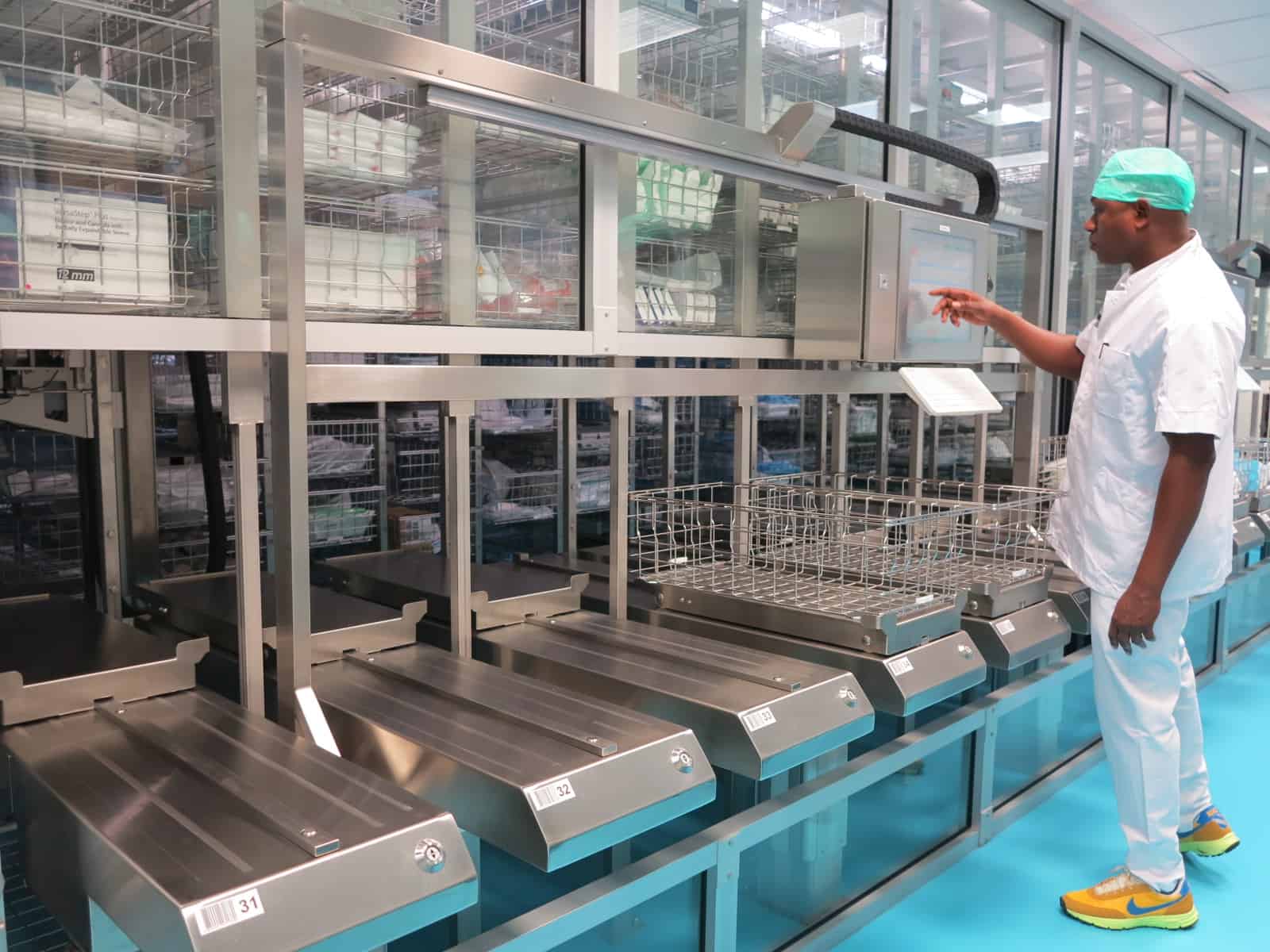 Satisfied employees An auto­matic steri­lization central will improve employees work routines signi­fi­cantly. The concept is based on the overall automation of most of the heavy and repe­ating tasks, by replacing the manual processes with robots, mobile robots, and conveyor systems.

It is an amazing opportunity for us to test the robotic solu­tions in our current hospital. It gives us a tech­no­lo­gical advantage for 2020 when we are moving into our new super-hospital. The expe­rience that we gain will be tremendous for us when we develop our high-tech labo­ratory in the new hospital, while also ensuring the absolute best in terms of patient safety today. 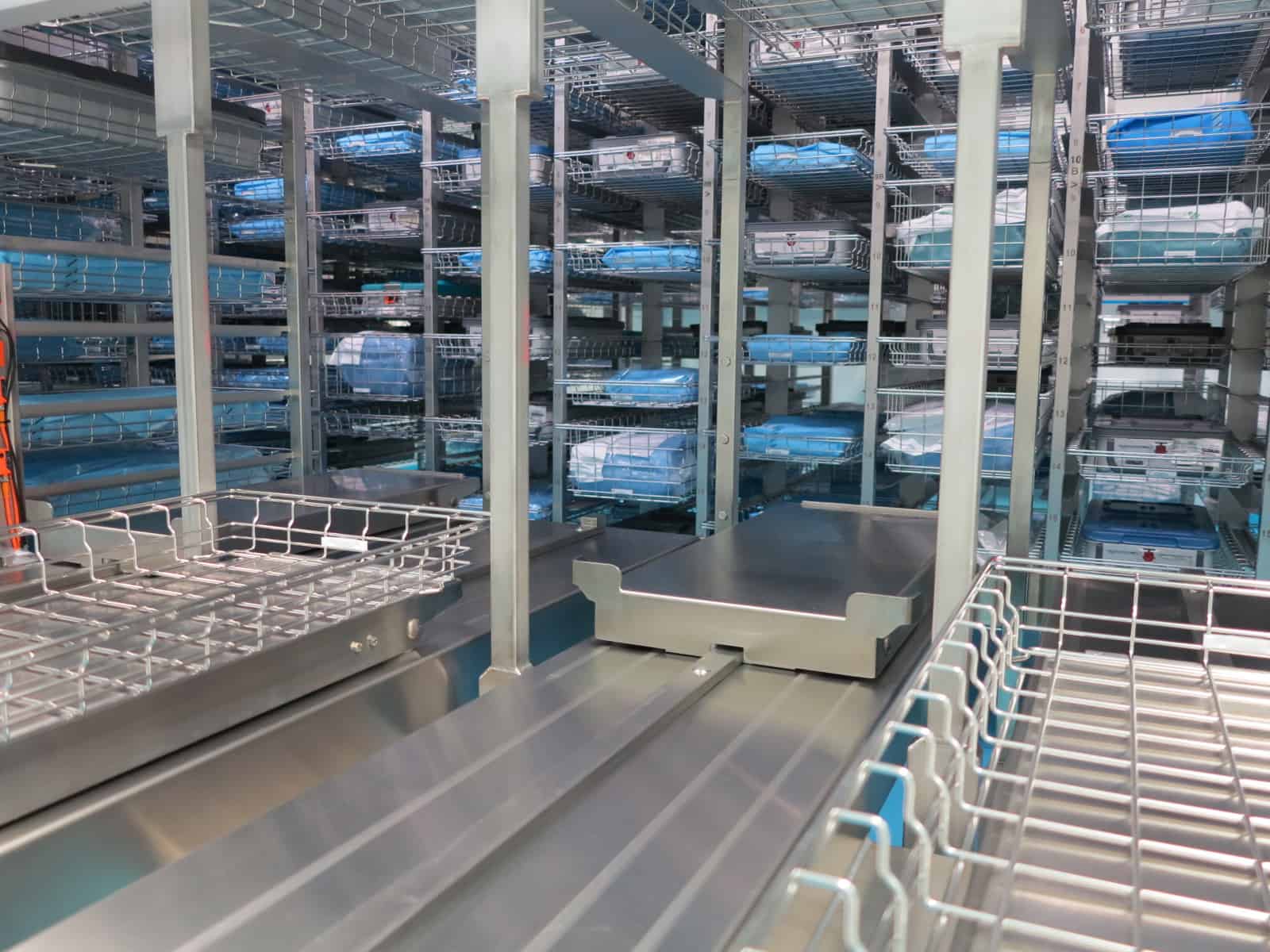 Efficient storage control By auto­mating the control of the sterile storage, the hospitals require less space for storage of surgical instru­ments. The inventory robot supports the control of and compliance with expiration dates and first in, first out prin­ciple, which result in a more even distri­bution of the sterile instruments. 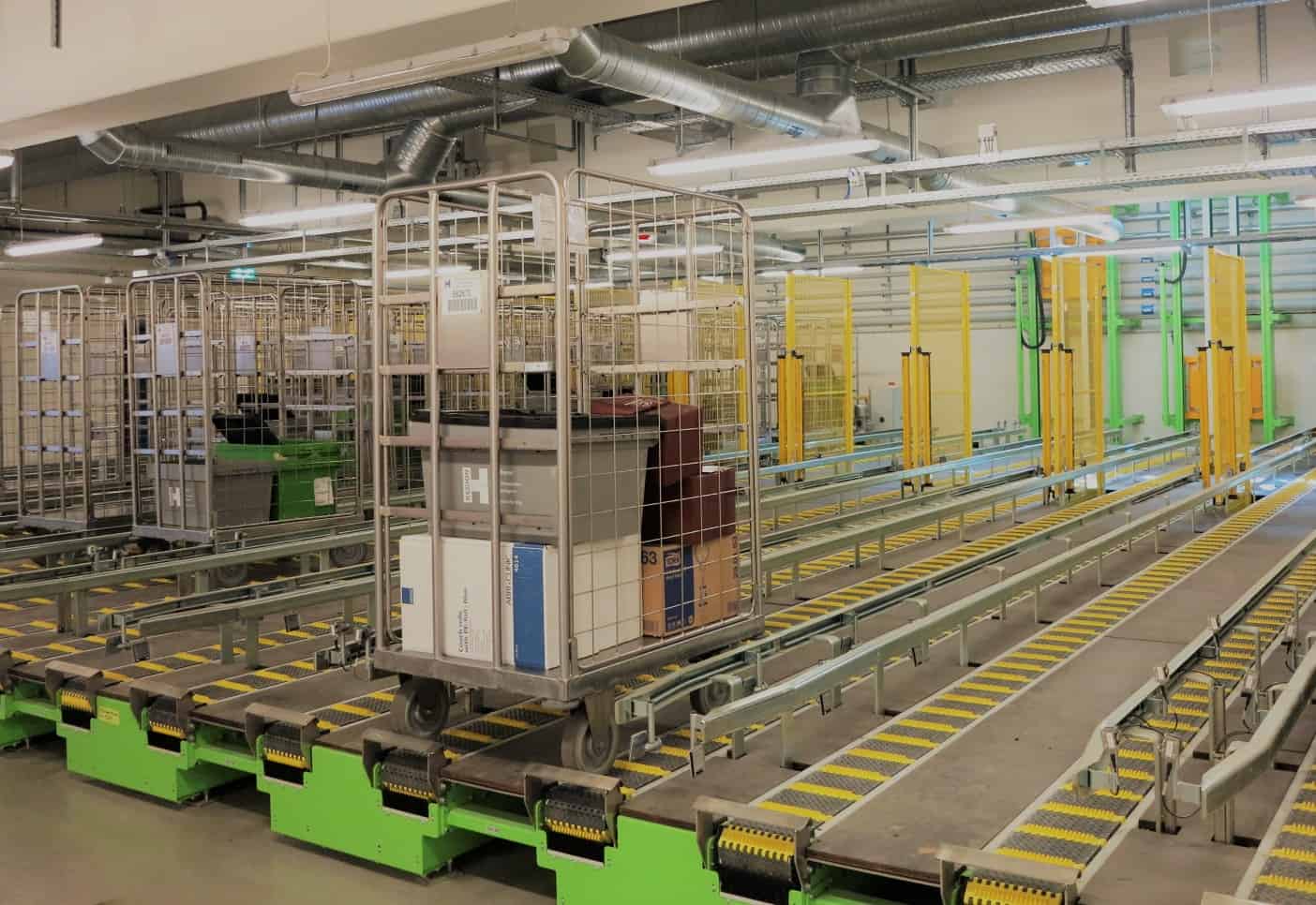 Optimal use of buil­dings An auto­matic steri­lization central can be installed in new buil­dings, or adjusted to fit the requi­re­ments in existing buil­dings. The robots are flexible and have fewer demands for the physical work environment than employees, which make it possible to place them in less attra­ctive rooms like the basement.

Brands that can supply these solutions 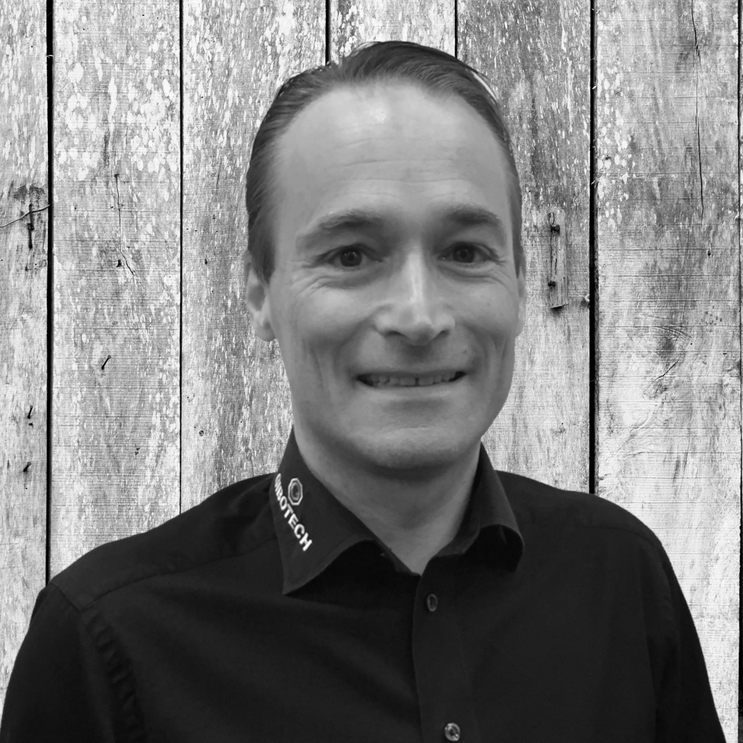